Last night, Scott Beale of Laughing Squid kicked it off by hosting a truly memorable Drinkup pre-party at Asgard in Cambridge. 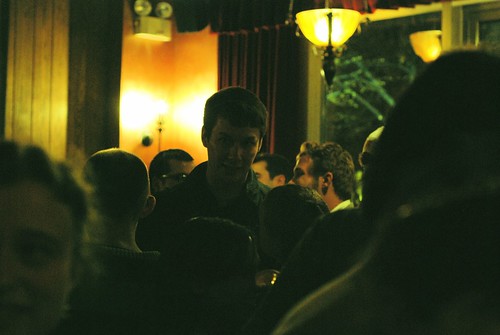 It was great to be among so many people who appreciate a good piece of internet culture and love what they do. Everywhere you turned there was another person whose work you’ve admired from afar, and everyone was extremely approachable and friendly. Although there was some welcome overlap, it felt like an entirely different crowd from the set of people I’m used to seeing at internet conferences and unconferences. It’s really exciting to be a part of an event that’s all about content and the people who make it.

After the drinkup I ended up grabbing dinner at Central Kitchen with bestest friend and frequent heh contributor Doug from Barbarian Group, and Ben, Eric, and Kari who comprise I Can Has Cheezburger. I can’t say enough good things about the ICHC crew. They were a blast to hang out with and after a very short time with them it felt like we all came from the same strange far-off planet. It bodes well for the conference that we were all too happy to spend most of the meal discussing past, present, and future funny things on the internet. Hopefully we don’t burn out on it in the next couple of days.

You can follow the conference through the official blog where I will be contributing if I have time, the Flickr pool, and on Twitter at @roflcon.

I prepared a special Extraface surprise for the ROFLCon goodie bags and can’t wait to share it with you once I see it in the flesh and can get some pictures of it. I’ll also be posting a way you can make your own and play along from wherever you are. I hope to publish some heh today, but if I don’t get the chance rest assured I’m engaged in celebrating heh all weekend.