February is apparently “free neat stuff from nice people” month, between the Dulce De Leche concoction from Blake and this.

Big thanks to Leah for sending me the Sinclair Gas patches depicted below. The design is really pleasing, so simple and beautiful. 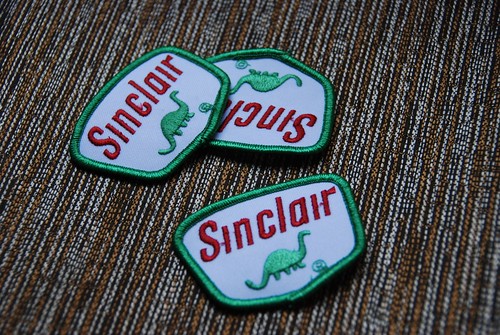 A little background on the patches, Sinclair, and how they made it to my living room:

Leah’s great grandfather, Granpa Jimmy, was a truck driver for Sinclair. One of the stories he used to tell is that in those days, to keep the truck from exploding they attached a chain to it and it kept it “grounded” by dragging on the road. As Granpa Jimmy told it, when her great uncle (also Jimmy) would hear the chain on the road, he would climb out of the school window, run to the truck and join Grandpa Jimmy on his route.

Leah’s dad had the patches made for her family for Christmas in 2005, and gave them out along with that story. She thinks he probably found one of the original patches at a thrift store and had some new ones made from it. Her dad gave her all of the extra patches, and she couldn’t think of what to do with them until she saw this photo in Josh Hallett’s Flickr stream: 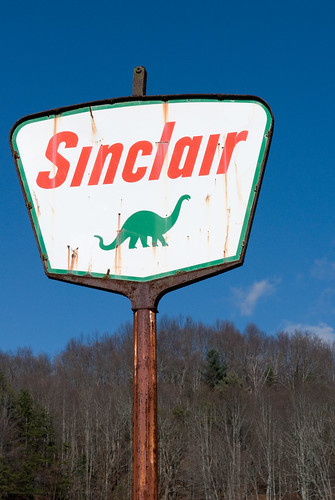 When she saw the photo of an old Sinclair sign and the interest in it, she remembered the patches and sent them out to a lucky few of her friends.