When I think about doing work that strives to affect the quality of the day, I try to bring my mind back to this project and its (now historical) context, and what Shepard Fairey did with such a simple gesture.

This is Shepard Fairey’s initial well-known public work, a Buddy Cianci sign where I grew up in Providence. I used to see it out the bus window as my bus went from the East Side to Smith Hill or downtown. This piece had an amazing and inspiring outcome. It inexplicably traveled like memes do today, except in the purely offline world of 1989 and the early 90’s, via sticker templates that organically traversed the world: 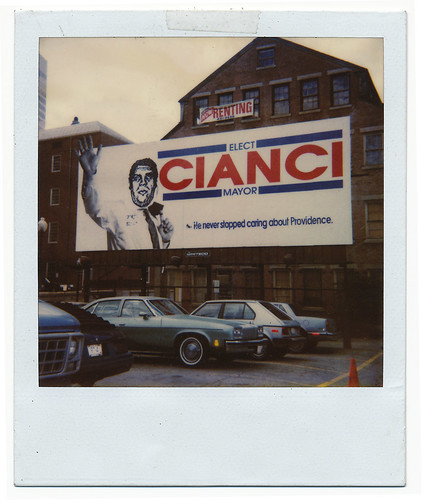 Shepard sold groovy one-off t-shirts of the Andre sticker design at Thayer Street sidewalk sales and RISD sales. I wish I still had a couple now.

As a now-cancelled Kickstarter project for a documentary about Shep’s early years explains:

“…Shepard received a historic assignment that would later establish his legacy in Providence, Rhode Island. Each student in the class was given a fortune cookie, and tasked with illustrating his or her respective fortune. Shepardâ€™s fortune read: TO AFFECT THE QUALITY OF THE DAY IS NO SMALL ACHIEVEMENT. He then decided to paste his Andre graphic over the face of notorious Providence Mayor, Buddy Cianci, on his re-election billboard, located in the heart of the city.”

I wonder if the documentarian eventually came across the work of my friend Helen Stickler, who did essentially the same thing years and years ago.