It’s been a weird weekend. On Friday night, the tornado that ripped through downtown Atlanta and then Cabbagetown came through East Atlanta. I was lucky that there was no damage to my house, and the power was only out until early Sunday morning, but lots of my neighbors weren’t so lucky. I decided to write down some of my recollections, and this entry got rather long, so I put it all in the extended entry. Click the “more” link to read all of it. 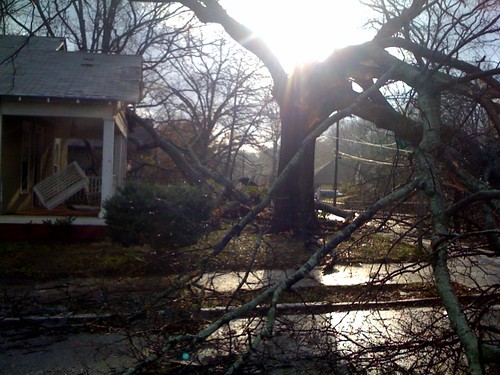 A whole bunch of us were at the Flat Iron, celebrating our friend Sarah’s birthday starting around 8 on Friday night. I had just baked some failcakes for the occasion.

I was standing outside the bar with a couple of people when we noticed the temperature drop suddenly. Then we saw a wall of rain, I mean a wall of rain, coming at us. Instinctively we ran inside for cover, though we didn’t really know what it was. The rain turned to huge hail, which I’ve been describing as “Paul Thomas Anderson movie hail” sized. At some point the power went out. The air pressure changed inside the bar and my ears popped. We were all huddled in the middle of the bar as one of the staff had no luck getting the front door closed. Eventually in a lull it did get shut, and whatever was going on outside rattled the windows hard and freaked the heck out of us. When it seemed like it had passed we went outside and noticed that all of the lights were out everywhere, random debris was strewn all around, and one of the streetlights/traffic lights had bent. 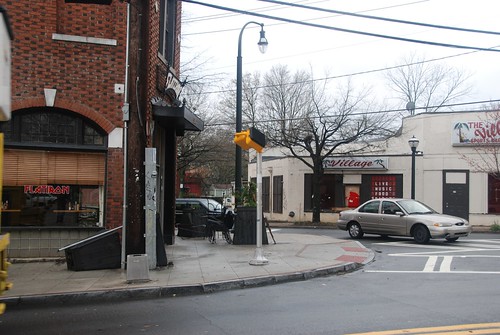 I got some word via Twitter and then word of mouth that a tornado had hit at the Georgia Dome and ripped part of the roof off. Timeshifted.org has a retelling of the Twitter stream he saw as the tornado rolled through. I was glad to have Twitter that night.

We all hung out at the bar for a while trying to get our bearings. On my way home, the magnitude of the destruction was immediately evident. On my way back to the car I nearly caught myself in a dangling powerline that was hard to see in the dark. 4 out of 5 roads were unpassable due to downed trees and power lines. There was a large police presence, and traffic was struggling to figure out where to go. My neighbor had called me to tell me there was a tree down at the end of my street, so I’d have to park nearby and walk home. I was nervous about my house and my dogs.

It turned out there was no damage to my house except a random piece of metal lying in my driveway, which I thought might have been a gutter. Still no idea what it was or where it came from. My power was out, my dogs were freaked out but fine, and my weather radio was doing its job.

On Saturday morning I woke up and took a quick tour of the neighborhood with my camera.

Here are all the pictures from Saturday and Sunday:

I didn’t get a chance to see them at full size until last night, and I had forgotten some of what I had seen. We heard reports that there were more severe storms coming through, so a friend and I went out to get supplies and brace for round 2. When it looked like the noontime storm had skipped us, I figured it was ok to go out and meet my friend Chris for coffee and get some internet at Dancing Goats Cafe in Decatur. While there, we heard that between 4 and 5, another severe storm with tornado-like characteristics was coming through. I talked to a neighbor on the phone and he said the radar made it look like it would come straight over our homes.

I pulled up Weather.com while there, and seeing the internet tell me to seek shelter was worrisome.

The rain started outside and I wasn’t sure what to do. I waited it out, and headed home under overcast skies until i got to Little 5 Points, where it was bright sunshine.

When I looked in the back of my yard, I saw huge pieces of hail sitting there. 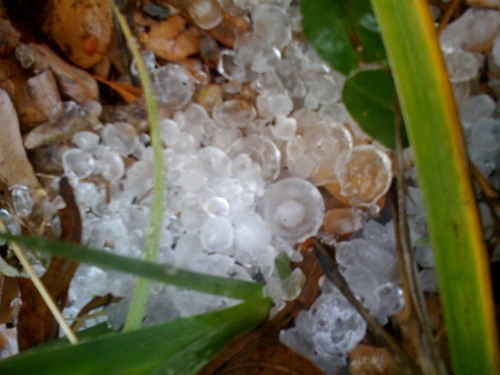 Weather reports seemed to indicate that there was nothing else on its way, and we could relax a little. In the afternoon I got a text message saying there would be a kegs and generator party at a friend’s house, as a rescheduled St. Patrick’s Day party and to give us something to do at night. That turned out to be a great time. 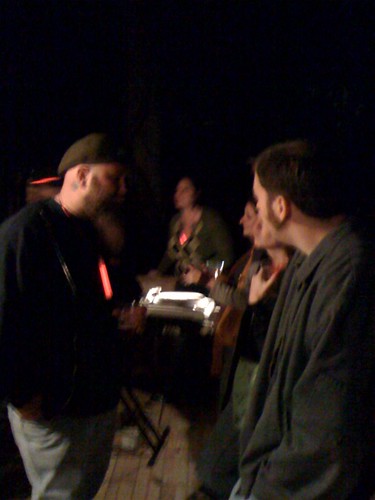 While at the party, I got a text message from my neighbor Bill — “power is on!” — so I headed home. Indeed, when I got back, sweet sweet power. Still no internet, but I slept much better that night. I heard there was a big cheer at the party when the power flipped back on there.

On Sunday, I used my iPhone to check our neighborhood message board and find out that we were getting together at 11 to help clear the roads of downed trees. Sunday at 11 is usually dog park time, and as I drove by I noted there was a huge tree blocking the entrance to the dog park. 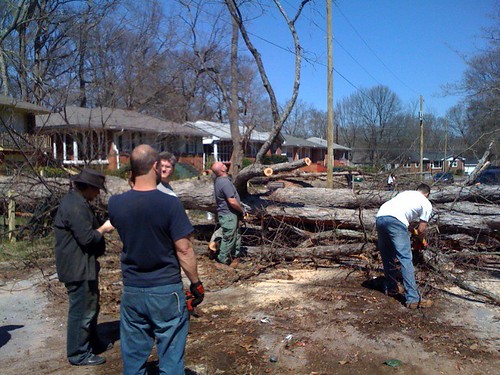 About a dozen of us showed up to help, with about 4 chainsaws between us and so many black trucks that we must have been a scary motorcade. Others got together to make sandwiches and get water for the crew. It felt great to be able to do something helpful. We cleared a tree at Van Vleck in a little over an hour, with the help of a neighbor who pitched in with the big stuff. He kind of charged in out of nowhere with a bobcat and helped get us through the tougher parts. 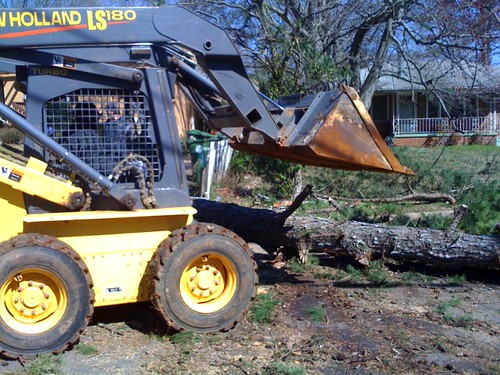 We moved on to Blake, where there were two or three of the biggest trees I’ve seen all leaning on each other in the middle of the road. we probably spent over 2 hours there, 4 or 5 chainsaws going and the rest of us hauling wood to the side of the road. At one point, while we were somewhat stuck for a plan of attack on the biggest part of the trees, a truck that said “Timberwolf Tree Service” rolled in. A dude with a much bigger chainsaw than ours got out along with his assistant, didn’t say much, and just started cutting. 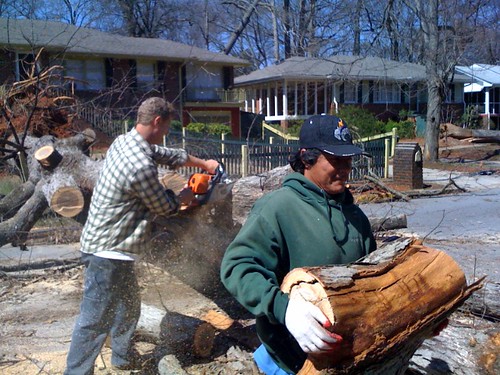 He cut down the thickest part of the trees for us, and then said something like “you should be good from here”, and got back in his truck and left. With all of the stories going around about price-gouging among tree services, we were extremely thankful that this guy did such a good deed for us. If ever you need tree work done in Atlanta, I’d give him a call.

After we finished on Blake we headed to the dog park, made quick work of the tree there, and then headed home. Once I stopped working I realized I was more exhausted than I’d been in a long time. Comcast internet came back on line some time last night, and at least inside my house things were pretty much back to normal.

A couple of things I learned in the experience:

Update: Rusty put together a helpful list of local coverage, video, and photos.