I just finished reading Understanding Comics, by Scott McCloud. It instructed, inspired, fired, and delighted me. It's a singular work of clear and penetrating explanation, but you probably already knew that. I'm like the television neophyte discovering Seinfeld for the first time in 2006. 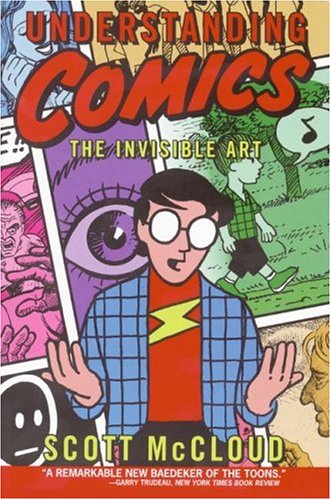 Why me and this book didn't meet sooner is beyond me. I hadn't even heard of it until Gregg and Tom mentioned it in separate conversations over the last couple of years. I've got half a mind to suspect some future version of myself traveled back in time and played this cruel joke on me.

McCloud goes to lengths to point out that single-panel somethings are not comics by his definition. They may be cartoons, but they aren't comics because they aren't sequential. In fact, single-panel jobbies are one of the only sequential art/words/things that McCloud's definition excludes. But especially as relates to the internets, single-panel illustrations with text are a very popular mode of expression in these troubled times. Think of lolcats. Think of YTMND. Just as comics were once thought of as kid's stuff and not the province of art(and still are if you're a dullard who also hasn't read the book), I wonder if the individual(or looped, in the case of YTMND) panel is getting the same undeserved short-shrift. Between image search engines, meme-creation tools, and sites that encourage captioning and notes within photos, you have ready tools for illustration-tards who nevertheless have something to say. There should be a term or a genre for what people do with the minimal tools of Flickr to communicate, entertain, and enlighten.

Please note: If McCloud has taken on this concept in later books like perhaps Reinventing Comics, kindly shove my nose in it and I'll be duly motivated to go read that next.