My aunt/uncle/cousins always give me very thoughtful gifts(thanks Stones!), and this past festivus they gave me an Amaryllis bulb growing kit. I followed the instructions fastidiously, and placed the watered bulb in its pot filled with dirt and moss on top of my refrigerator. This is to make sure it gets enough warmth and sunlight as it initially busts out.

A couple of weeks later, when I returned home from a business trip I found that the first stem
had grown so high and fast it was doubled over, bending at the kitchen ceiling. I don't know what it is about my kitchen, but apparently it's got some sort of X factor that turns plants into mutant giants.

So I carefully brought the plant down from the fridge top, but in doing that I had to lift the pot up before I brought it down. This had the unfortunate effect of snapping that first huge stem. It hadn't flowered yet, and I figured it was doomed to wither and die, and put my hopes on the second stem. But check out what I found when I got back from my LA trip: 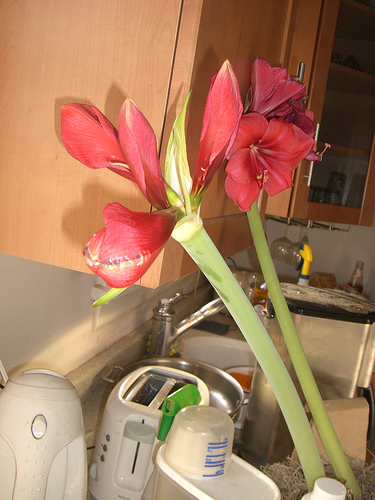 Broken stem on the right
And here's how broken the stem is: 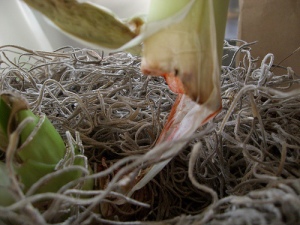 The series of tubes has been reduced to just a few

Round of applause for the blossoms that perservered despite that handicap:

the one with the broken stem