This morning, we euthanized Max (Mandrake) Coustan after complications from an unknown immune mediated condition caused rapid kidney failure, respiratory infection, and DIC (Disseminated intravascular coagulation.) He reached a state where his kidneys were doing nothing for him, his blood wouldn’t clot, and increasingly he had trouble breathing. Last night when we visited he just wanted to rest and could do so fairly comfortably. This morning he could no longer do that and all of the medical data was off the charts bad. 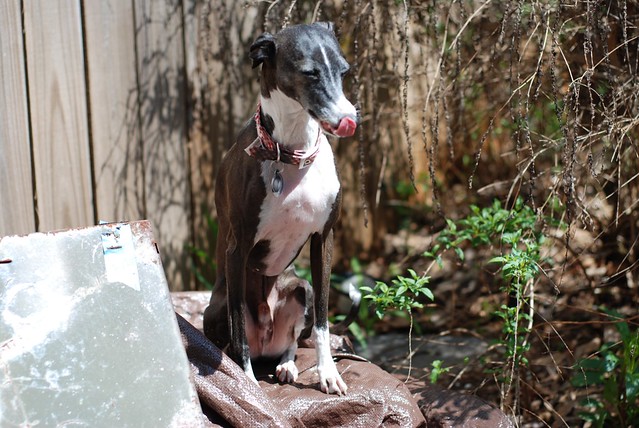 If you never met him, key attributes included a broke-ass tail, a mouse face, and a clown nose at the end of his beaklike snout. He could wriggle that clown nose as if it was fastened on to his head with spirit gum. He was plagued with bad teeth throughout our time with him and was down to about four, but managed to hold on to his defining two fangs through his last days.

Max spectacularly escaped death on numerous occasions only to live another day – once nearly choking to death on a chewie (rawhide), another time same scenario on a bully stick, another time nearly eating himself to death on dry kibble when his steroid-fueled appetite caused him to tear in to a bag.

When he first came down with the unknown condition that would eventually overtake him, he found himself in a state where he was down to 9 pounds from 16, and wouldn’t eat but a few nibbles of baby food from a fingertip each day. Weeks and months and many tests later, we couldn’t isolate the cause but did manage to stabilize him. With the assistance of steroids to help him keep his immune system from attacking itself, he fought his way back to relative health. Countless attempts to wean him off of the steroids without negative effects were unsuccessful, and on several occasions unexplainable swelling landed him in veterinary hospitals and with specialists. On one such occasion his face swelled up so much he looked like a sumo wrestler, and a surgeon sure he was going to find a foreign body in his neck found nothing and told us he was one of those rare unexplainable cases and would have to be on steroids for the rest of his life.

Not long after, Max had one of his discs threaten to rupture, making him unable to walk. After one surgery to ease the compression of his spinal cord, he had a partial recovery but didn’t recover as much function as we expected. A second surgery then enlarged the hole in his neck to allow for more scar tissue to grow without impinging on his spinal cord, and that brought back most of his function, even if he would continue to walk a little funny from then on. At that time we had decided that if he never regained the ability to walk but was otherwise ok health-wise, we’d be willing to strap him in to a Baby Bjorn and act as his legs from then on.

Throughout countless conditions, procedures, and trips to the vet, Max maintained his demeanor and almost never whined, moaned, or cried. The one whimper I heard as I drove him back from UGA Vet hospital after his first spinal surgery let me know something was probably really wrong.

We learned a great deal from Max, about how to face tremendous adversity and remain positive and constructive. As a friend and teacher, he was always there for us, and more than a few times helped me keep my own misfortunes in perspective. As the head of Mouseface Accounting LLC, he did his best to prepare tax returns on time and with the maximum allowable deductions for his clients, but I have to admit he always struggled. We never did get him that green translucent visor – maybe that had something to do with it.

We are tremendously thankful to everyone who helped Max over the years, and there are a ton of folks to name. I adopted him from Small Dog Rescue up in Sandy Springs when he was an adult dog, and will always be grateful to Tom Harris and Carrie Williford along with all of the volunteers there for bringing him in to my life. Dr. Smallwood at St. Francis Animal Clinic in Decatur helped with his initial diagnoses, and although that wasn’t a great experience when I recall it honestly, I am grateful for her help in putting some parameters around what Max had and getting him on the Azathioprine that would help him have a few more years with good quality of life. Same for East Atlanta Animal Clinic – we had some rough patches with them here and there but I sincerely appreciate the care they gave Max when he was their patient.

I am so glad we found Village Vets of Decatur, and Dr. Ashley Alford there, who might as well have been Max’s personal physician. She helped us navigate the mounting challenges as his condition’s effects stacked up on us, and always remained positive and helped find solutions even when we were all truly puzzled – same goes for the entire staff there, including the ER docs, vet techs, and desk staff who got to know Max a little too well the past few years. Dr. Landrum was always helpful and compassionate, and Dr. Slider was tremendously helpful as well through Max’s last moments.

Thanks to Dr. Boozer at UGA Animal Hospital, who worked miracles in helping restore his back leg function while navigating his immune condition, when we knew the odds were good it was gone forever. Georgia Veterinary Specialists helped us chase down his swelling, and helped him past a couple of crises. There were many people who looked after Max in times when we took some time away and his health was still up in the air, including Tom and Carrie, Tori L., my parents, Molly’s mom, etc. Barking Hound Village Lofts took him in and made an exception even after we stopped vaccinating him, and made sure he had good care there. Madison at Frogs To Dogs stayed with Max in our house when he could no longer go to boarding. And of course, Kat and Jonna, our dog walkers but much more than that. Jonna took Max’s challenges on as her own, giving him his own walks when he couldn’t keep up with our other dogs, always there to do anything when Max’s health and happiness was at issue, and caring for him as one of her own.

And thanks to my sister Rachel, herself a vet who helped us with decision-making every step of the way and patiently answered countless questions from me.

We feel truly honored to have had the time we had with him, and know he touched the lives of many and made the world a better place in a lasting way. He will always be a part of us, but he will also always be missed.