I'd been told a zillion times that Chastain is an awful, awful venue. It's mostly corporate season-ticketed tables set up for dates and the country club set, and most of the patrons don't seem to know who it is who's performing that night. But it's Morrissey, and I'll go wherever he's playing. Last time he was in town I had a ticket but was too ill to use it, so I was overdue. 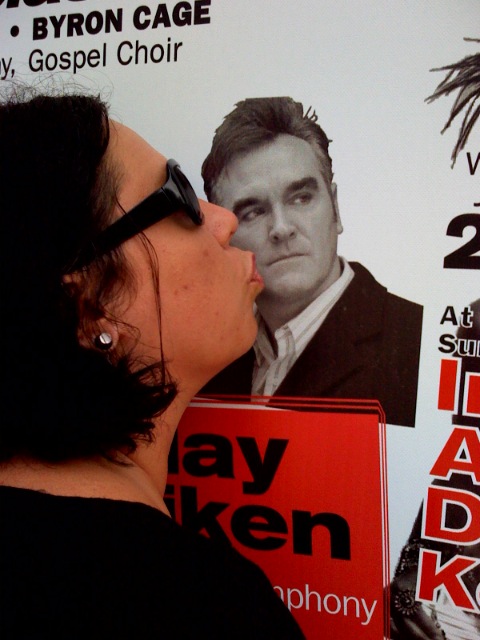 As we came in I was immediately struck by the strange fancy foods and sea of pastels and bermuda shorts. People were in line to buy high-end beer and wine, big blocks of cheese and baguettes, and many were toting pickinick baskets. We walked past the merch table and I spotted a batch of shirts that say "Moz Posse." I wonder whose idea that was, and why Morrissey put up with it. It's a far cry from the "Last Night I Dreamt That Somebody Loved Me" pillowcases.

The seats that aren't table seating are somewhere between benches and molded chairs, and aren't uncomfortable but they're all attached so the energy of the whole place is sedentary. There are few aisles and you're clearly just supposed to remain seated and stay calm during the rock and roll. Boo. I wondered to myself and to my neighbor if the guys sporting Brooks Brothers "golden fleece" polos ever thought about getting golden fleece tattoos. 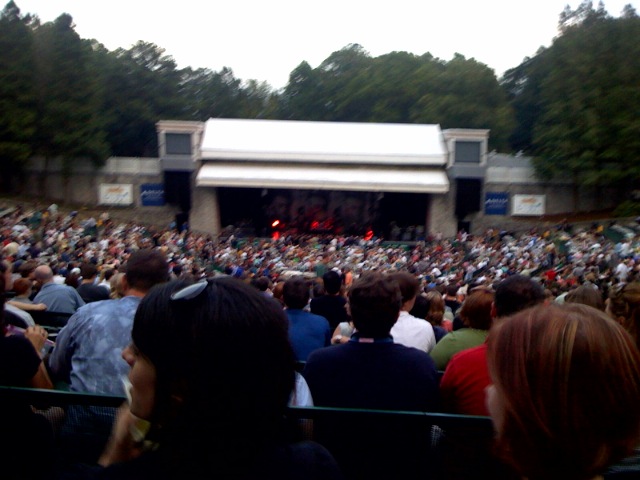 After the opening act, I think her name was "Not Morrissey," in the twilight sky someone spotted a bat. It was having a blast divebombing for mosquitoes and thrilling us with its death-defying stunts. I was pretty sure it was going to lodge in some poor, unsuspecting Buckhead hairstyle. I guess I was watching it with too much interest, as some woman sitting behind me tapped me on the shoulder and asked, "Excuse me, what's the significance? What's the bat doing here? What does a bat have to do with Morrissey concerts? Is there some symbolism there?"

I did not intend any snark whatever when I replied, "I don't know. Ask the bat?" I guess she thought it was part of the show. The bat did stay for the entire show, and was joined by some friends as well. They did not rush the stage or give Morrissey a rose and a hug.
Turns out I was way wrong on this. A Morrissey-Solo commenter has it that he held up a box of Cheez-its or the like and said: "You've brought dinner; I've brought mine."

He opened with Panic, and seemed to slip a little on the lyrics/rhythm. We stood up and sang along in our seats but there wasn't much energy in the crowd around us and we felt like we needed to be closer. After a few songs three of us ended up together somewhere near where the floor seats end and the risers start. Granted, we were poaching seats, and there were signs on our row that indicated no one was supposed to sit there, but it was the only way we were going to actually get the experience of being at a rock n roll show. The crowd up higher in the risers could have been anywhere, watching anyone.

I think it was at the third or fourth song when the people behind us asked us to sit down. We begrudgingly complied, but then a song or two later, the same guy handed me his fancy digital SLR and asked if I'd take his picture with his lady. They were seated at a table with a white tablecloth, glasses of white wine, and various snacks. I declined, saying I was busy trying to enjoy the concert. After a moment's thought I took our my iPhone and snapped a photo of him.

Once Morrissey got rolling I had a really good time. I twittered the set list. I missed a few new-ish song titles but here's most of it:

I was pretty pleased with the song choices. He's got so much material, I'm just looking for a decent balance between Smiths stuff and his solo stuff. And the version of Please Please Please was inspired. How Soon Is Now included some heavy gong action, and there was also a trombone solo at one point.

A couple of decent antics — he pulled a little girl on stage with him and couldn't quite get out "this is my daughter" without cracking a wide smile. He then said something like "this isn't working out" and handed her back to her folks.

He also made several references to Atlanta's own Pig N Chik barbecue joint:

"We were driving on the road and saw a restaurant – 'Pig 'n Chick' – can barbarism get any worse? Well, I suppose it can."

..as well as a few token anti-Bush and anti-Republican lyric switches. He also made a comment about the whole season tickets vs. one-off Moz fan division and the strangeness of the venue. It was nice to hear he was hip to the venue situation. All in all, he seemed well and surprisingly comfortable in his own skin. I think LA has been good for him.

Some of the other people with us said they were a little disappointed in the performance, and they weren't sure if he was feeling it. I guess measuring a performer's mindstate is a pretty subjective exercise. I felt like he was. His voice was really strong and he kept the Sinatra-like saying-instead-of-singing to a minimum, which I feel like is a decent "I'm not feelin it" level indicator. To the credit of the non-season-ticket holders, the crowd was very appreciative throughout the show, and they knew to give Boz Boorer an extra loud cheer when Moz announced him. There weren't any of the usual stage invaders until the encore, and during the encore I'd say there were about 5 successful drive-by huggers. I heard secondhand that the security folks at the stage had been pretty heavy-handed.

Despite the venue, to which I'll likely not return, I had a great time.