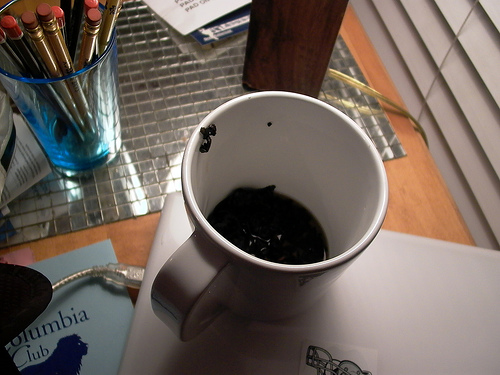 End of the tea

This is going to sound like a J. Peterman story, but the friend who introduced me to this tea was a monk from Thailand named Tan Suvit. He was one of my very best friends when I did a year's study abroad in London. More on Tan Suvit some other time. Supposedly he's vice-abbot of one of the main temples in Bangkok these days, but I've not been able to track him down with a letter or e-mail,despite several attempts.

He called this stuff "smiling tea" because the Ginseng roasted into the Oolong leaves coats your throat and generally makes you smile. In my experience, drinking it reversed many a crappy mood.

I was trying to decide between tea and booze tonight. Booze (or beer) is good to unwind with but tea soothes and gives the illusion that it's sharpening your perceptions. Or maybe it really is. Last night I had some English Breakfast before I went to bed and it kept me up longer than I intended, but it brought me to a nice relaxed, pointed calm instead of a beery, dulled calm. It's getting colder out and tea feels like the right thing say around 9 pm. Although herbal tea would make sense at night, other than Chamomile (ok and peppermint) I usually find it boring. I want the monklike focus that fruity or herby teas don't really offer.

So I'd decided on tea but wanted something other than the E.B. I have a shelf of forlorn teas up above the more commonly used ones, and up there tonight I spotted the King's Tea 409 tin. Yeah, that's the stuff. How could I have forgotten that was there? Summer, I guess.

It's expensive ($48 for a little over 5 ounces), but highly highly recommended if you have the means. It keeps forever, and it stands up to multiple hot waterings. It just might be my favorite tea of all time. If you have a preconception about what teas with ginseng are like, this tea defies it. The description on the Ten Tea site is pretty accurate:

"The steeped tea has a light
golden brown hue, roasted aroma with sweet undertones, the initial
flavor of roasted chestnuts, and a strong, sweet and roasted aftertaste
which lingers at the back of the throat."